Societal and political concerns such as the ‘housing crisis’ call upon spatial planners to organise action in relation to a growing demand on the housing market, and to provide space for growth. At the same time, crises in areas such as climate, environment and biodiversity require action to plan against adverse effects of the growing use of land for settlements and commercial uses, and the resources involved for construction. Faced with this situation, spatial planners can position themselves in relation to growth in one of two directions: (1) coping with or supporting growth, and mitigating its adverse effects, or (2) developing growth-independent ideas and solutions. Until today, the second direction of moving beyond growth remains a distant debate in the daily practice of spatial planners (see e. g. Barry, 2020; Rydin, 2013). The tasks and roles of organising the use of space too often centre around working for or with economic growth and a growing use of land. Has planning become part of a vicious circle that aims to cope with growth and its effect, but loses sight of long-term human well-being as a normative direction?

Post-growth and degrowth thinking offer confrontations for spatial planners and potential pathways to break out of, and discuss, the impossibilities of continuing a growth-based agenda and providing sustainable solutions. A post-growth planner would be one that perceives growth neither as a necessary starting point to plan from, nor as a goal that should be achieved by means of planning. Confronting spatial planners with the term ‘post-growth’, its background, and its (potential) normative directions uncovers versatile reactions that can be understood in terms of institutional and personal concerns. This article reveals struggles related to diverting from a growth-based agenda. It is based on observations in German planning practice, a series of organised discussion and debating formats, and international reflections between 2017 and 2021 (see Lamker & Schulze Dieckhoff, forthcoming). 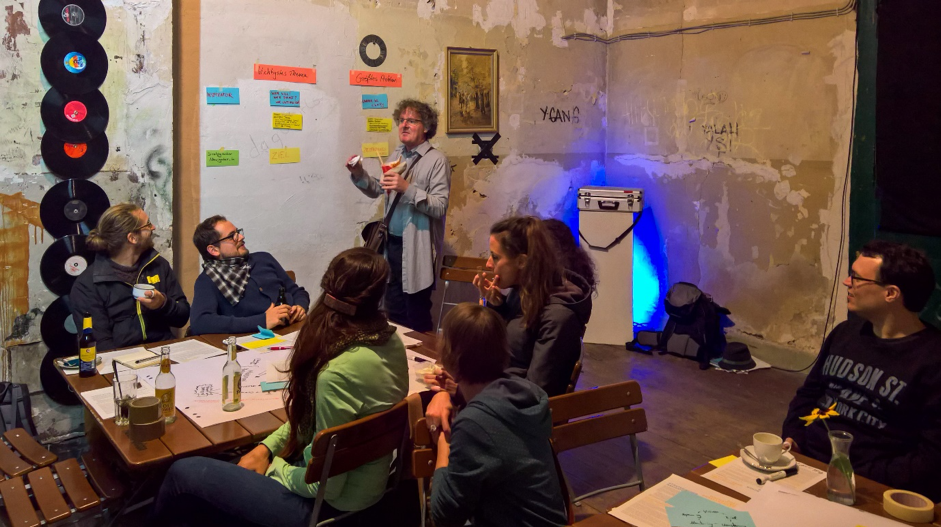 Connections between spatial planning and post-growth thinking are still limited to notable exceptions, such as Rydin (2013) who analysed growth dependence within planning in the United Kingdom, and Barry (2020) who stresses the urgency of planning in and for a post-growth economy that has become more visible in the past years along with environmental and climate movements. However, spatial planners did not yet enact roles that can deal with large structural challenges and constraints, such as the transition to post-growth and post-carbon economies (Barry, 2020). Post-growth means acting in circular ways with available resources (including land) through a multiplicity of roles, with the aim to enhance the quality of life for a diversity of people. It has become a more common subject only recently, shown for example in the annual congress of the German Academy for Territorial Development in the Leibniz Association (ARL), which focused their discussion on post-growth in June 2019, and in the emergence of national networks like the Dutch Degrowth Platform (“Ontgroei”).

This line of thought was the starting point for a series of so-called ‘transformative confrontations’ in Germany between 2017 to 2020 – these were open discussions in which planners were confronted directly with terms and thoughts on post-growth. The aim was to understand the obstacles and challenges for changes in roles and practices of planning. Ultimately, the discussions were meant to kick off a wider debate on ‘post-growth planning’ that could trigger a transformation towards developing growth-independent roles for planners. In workshops and conference roundtables, planning practitioners and planning researchers working at urban and regional scales were confronted with the term ‘post-growth’ and debates surrounding it. Major elements of post-growth concerns have been used to kick off debates about: (1) absolute limits to available resources (especially land) and (2) untying the economic focus in established criteria for success (especially the Gross Domestic Product). Both directions touch upon basic understandings of spatial planning in relation to growth.

In active debates and in observations of reactions by planners in Germany, nine positions surfaced. They cover a broad range of reactions to post-growth and associated struggles and show the diversity of perceptions that planners can have about their own roles:

1. Out-fashioned: “We did that in the 1970s…!”
2. Unnecessary: “There is Moon and Mars…!”
3. Inappropriate: “We only do growth…!”
4. Exclusivity: “That’s for young people and/or young academics…!”
5. Responsibility: “We follow political decisions and mandates…!”
6. Uncertainty: “What can we do with that…?”
7. Speculation: “What is the role of planners in that…?”
8. Inspiration: “How can we be part of that…?”
9. Revolution: “We need to smash the planning system and built it up from scratch again…!”

Ranging from full denial (out-fashioned, unnecessary) to full support (revolution), different types of reactions also included humble ones (exclusive, inappropriate), a puzzling about meaning (uncertain, responsible) and embracing a broad idea of change (speculation, inspiration). Some reactions among these transformative confrontations were bold, straightforward, and denied the relevance of the debate at all. The most extreme position was taken by a planning researcher who cooperates frequently with local and regional planning practice. This planner pointed to the abundance of resources on other planets and the need to develop respective technologies to mine them, instead of switching to a post-growth pathway that needs fewer resources.

However, beyond single extremes, there is a growing recognition of the limits of planning to develop and deliver sufficient answers. For example, planners stressed that they found it increasingly difficult to locate and designate land for future developments. There is a group of planners who are, in principle, open to post-growth thoughts but struggle to imagine themselves and their roles in a growth-independent environment (positions 5 to 8). In many cases, their aim is to reduce the need for new resources and new land in individual projects, but cumulative and long-term effects are left unaddressed. An extreme example came from a retired regional planner who saw the need to build the whole planning system from scratch to become independent of growth (position 9).

Although post-growth is becoming a subject for debate, it is yet a further step to enable spatial planners to become post-growth planners: those who work in and for a growth-independent environment and take others along. Daily tasks in planning departments vary widely and are often executed in a routinised and unquestioned way. The amount and diversity of work requires a certain attitude of ‘getting things done’ or ‘getting things off the table’. Nevertheless, most of these activities are not neutral and not purely objective. Problems such as the housing crisis unfold in manifold ways, such as insufficient supply, changing societal demands, lifestyle models, increasing rents, demographic changes, and financial markets and interest rates. Spatial planners are well familiar with such complex situations (or ‘wicked problems’). The way a problem is defined – and even more who defines it – already determines the options at hand. Spatial planners are part of ongoing processes in which stakeholders define and analyse problems, search for, and select respective interventions, overview their implementation and measure change and success – and start again.

Spatial planners in Germany stress an increasing pressure to deliver spatial responses to crisis situations– both long-term accelerating crises (housing, climate, biodiversity) and unexpected ones (financial crisis, COVID-19). For some, it feels like a race to keep up with change and convincing society and politics of the beneficial role and potential leadership that planning can provide. In such situations, why not test radically different thoughts? Taking a post-growth perspective can help to take a fresh look at perceived problems and potential solutions by trying different perspectives for one’s own role and daily practice. To do so, obstacles and challenges for spatial planners also need to be understood in their personal dimensions such as desires, emotions and the way in which planners make sense of their task and their environment (Lamker & Schulze Dieckhoff, forthcoming).

Words like ‘post-growth’ and ‘degrowth’ are helpful to confront and discuss even more radical alternatives. They help to name and uncover impossibilities and confront spatial planners with an alternative paradigm. However, these terms can also lead to harsh reactions (see positions 1 to 4 above). To reach a broader audience, speaking of a ‘growth-independent development’ could be more attractive than ‘post-growth’ to a broader range of planners. Such a move may strengthen a connection between emerging discourses about circular economies and circular resource flows. Further work is necessary to name the normative direction clearly but maintaining the potential for transforming and complementing existing roles and practices in spatial planning. Particularly important is avoiding re-entering a vicious growth circle by only deferring externalities in space (to other locations or parts of the world) or in time (to future generations). Creative ideas can emerge both from within spatial planning as from civil society and other stakeholders. As Kunzmann (2004) noted, doing planning creatively sometimes means “to be an urban or regional guerilla to undermine established bureaucratic and political agendas” (Kunzmann, 2004, p. 385). Post-growth reminds planners of the need to re-position spatial planning as a meaningful profession for the decades to come.

The term ‘post-growth (planning)’ and related debates have become quite widely known and used in German, Dutch, and European planning research, and connect with lively debates in South America and other continents (Savini, Ferreira & von Schönfeld, forthcoming). This knowledge shows entry points for planning practice to change towards growth-independent roles and practices, and ultimately to embrace roles that work for and in a post-growth environment. Contemporary debates in society and in spatial planning shift towards a transformation narrative, often based on a strong understanding of sustainability, circularity, and ecological limits. Reducing CO2 emissions and medium-term carbon neutrality (within 20 to 30 years) are regular aims and goals of local, national and international politics. Recent court rulings in the Netherlands and Germany show that endorsed climate change goals can be enforced and need specified and immediate measures – both from public and from private stakeholders.

A post-growth future may already be emerging in many minds, but uncertainty remains about its winners and losers, about the normative underpinning to answer such questions, as well as about the most helpful measures and roles to lead their collective implementation. What is missing are further ideas for how planners can be part of such transformative pathways and for how their roles might be delineated in a future that is circular, and ultimately post-growth. Confrontations with post-growth unveil that some spatial planners (in Germany) already perceive impossibilities in their daily practices that are caused by growth or cannot be solved with more growth. However, post-growth is still a distant future in practice. Taking this debate forward needs to be attentive to the range of reactions to post-growth ideas and values. Planners could play an active part in using a normative post-growth direction if future debates would take the multiplicity within planning into account and allow for in-depth elaboration of relations between post-growth and the long-term use of natural resources and land by means of planning.

The author expresses his gratitude to Viola Schulze Dieckhoff for joint work since 2016, to colleagues and friends in the collective post-growth planning (www.postgrowthplanning.com) who supported the work with inspiration and engagement as well as to editors and contributors of an international book project on post-growth and planning in 2020 and 2021.

This article is part of a Roolijn series of publications on ‘Degrowth’/’Ontgroei’, see the introductory article (in dutch), including links to the other contributions (partly in English): ‘Los van groei: diepgewortelde duurzaamheid voor de planologie?‘ 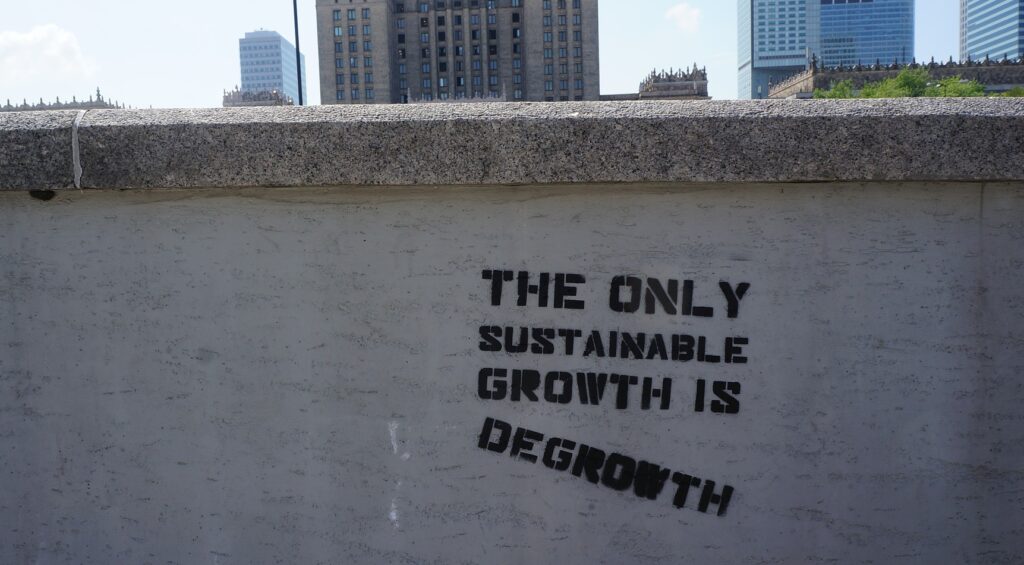