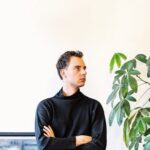 Martijn is an award-winning Beijing based Dutch architect.

He has been in China since 2010 and received PhD training under Chinese master architect Li Xiaodong, after being trained as an architect at TU Delft, in the Netherlands. He built his first building at age 19, after winning the ‘who comes after Rem Koolhaas’ competition.

His design philosophy is inspired by his early experience working six years as a zookeeper of Gorillas in the Netherlands, and possesses unique creative thinking while understanding the Chinese way of doing things.

In China, at Tsinghua University's School of Architecture, he is teaching in, and co-ordinating the international Master's Program in Architecture. Martijn combines his academic work with projects as co-founder of the office maison h / 汉荷设计, an international architecture practice with offices in China and the Netherlands. Recent projects include China’s first sustainable home, the world’s largest insect hotel, an integrated mountain-landscape Winter Olympic museum and two village regenerations.

He lectures frequently about his work, including at TEDx, MIT, Japan House Vision and TU Delft. Prior to starting maison h / 汉荷设计, Martijn lived, worked and studied in Europe, the US and China. During this period he worked with architects Li Xiaodong, MVRDV, Behnisch, Marc Koehler and Herman Hertzberger. His academic work is published in international journals, and he has co-authored three books on the public realm in contemporary urban space. His e-mail is M.deGeus@gmail.nl.